?Reid and Aloha Johnson recently packed up the dusty glassware and cutlery left behind in the historic Mason-Girardot Manor in Windsor's west end.

The Vancouver investors took away the chairs, tables, even the old photographs on the wall. The couple won't reveal too many details, but they've got big plans for the house that used to be home for two mayors of Sandwich back when the neighbourhood was its own municipality.

"Until we've been given the OK by the city planners, we can't say too much, except it will be a place the community is welcome to," Aloha Johnson said. "Can't let the cat out of the bag until the cat's been OK'd."

The manor was most recently a restaurant until it shut down almost a decade ago.

"It was as if [they] closed the doors and walked away," Aloha said. "It was in really good condition, but it hadn't been occupied for seven years or so. But, we walked in and said, 'Yeah, this is it.'" 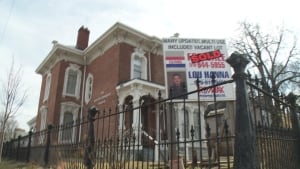 The new owners of the Mason-Girardot Manor say it will be open to the public. (Lisa Xing/CBC News)

Because it's licensed as a commercial property, the couple want to keep it that way, at least in part. But Aloha wants the community to have access to the property.

"They'll have the ability to see what the history of the place has been," she said.

When CBC News asked about speculation of the place turning into a cafe, Reid said, "well, the thing is, you come from Vancouver and you love coffee, typically."

History of the manor

Reid was just as cheeky about the possibility of creating student housing.

"We're about six blocks from the university," he said. "There's a lot of student housing around here ... there's a lot of room in that house. I guess our heart is for what the needs of the community are, and meets with our values. So, we'll see."

The couple is no stranger to renovations. They've worked on several houses in the Vancouver area, and are looking at other properties in Windsor.

"We know it has to be a partnership [with the city]," said Reid. "We like the historical component to Windsor. We want to bring optimism to the community. We want families to live here. We want to see the economy grow and peoples' incomes grow. We want to be partners in that. It's our heart to revitalize areas."

In the next month or so, the Johnsons will meet with the project manager, an architect and the city.

They hope to begin renovations within two to three months.